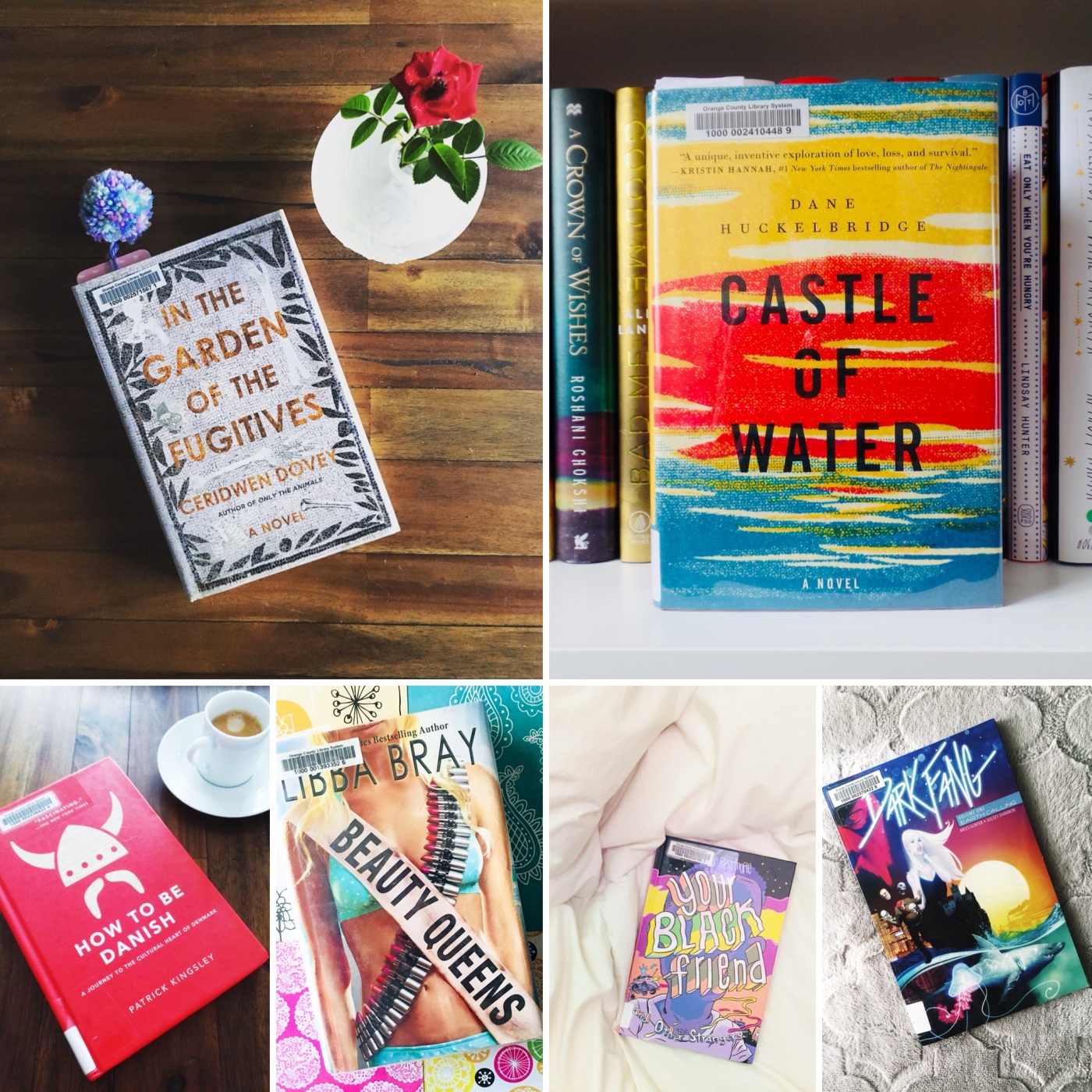 Wow, this is late! Well, you know what the say: who cares! I read seven books in July; three illustrated, one nonfiction and the rest were fiction. In order of lowest to highest rated, here’s my wrap-up for July:

In the Garden of the Fugitives by Ceridwen Dovey

I rarely have low-rated books because I typically DNF books that I’m not enjoying – and, out of principle, I don’t rate book I don’t finish. “In the Garden of the Fugitives” is told in a series of email exchanges between two people with a lot of ugly history. Vita has forbidden Royce, her one-time mentor, from contacting her. After he initates contact anyway, they both embark on a bizarre trip down memory lane, exchanging history and throwing shady accusations at each other.

The plot was psychologically engrossing and key details about their relationship were slowly revealed throughout the book. It’s a slow burn that ended up burning out with an all-too obvious ending and no clear takeaway or outcome. It left me feeling deeply unsatisfied.

A fellow bookstagrammer suggested Libba Bray to kick a reading slump. This read like was a fun cross between Miss Congeniality, Lord of the Flies and Airplane! I felt like Beauty Queens could have benefited from some heavy editing since some chapters felt long and drawn out. Overall, it was a light, silly read that made me chuckle and ultimately drew me out of my reading funk.

I saw the movie Valerian and actually didn’t hate it. Sure the two main characters had absolutely zero chemistry, sure the plot was convoluted and trite. And sure, it was a headache-inducing CGI smorgasbord. But I liked it’s style and imagination. I was curious to read the inspiration behind the movie, a French comic series with a ton of similarities to Star Wars (even though it predates it). This was probably a charming and novel series when it debuted in the 1960s, but it’s magic is somewhat lost on me. This is worth your while if you’re a fan of vintage comics or late 60’s-era science fiction.

Castle of Water by Dane Huckelbridge

This book took me by surprised with how much I enjoyed its simple prose and minimalist love story. Two plane crash survivors are stranded on a deserted island. An unlikely romance blooms between them as they struggle to survive with dwindling resources and the uncertainty of rescue.

This was a quiet, heart-warming read that had me really rooting for their love (and them) to survive.

Your Black Friend and Other Strangers by Ben Passmore

How about that cover, huh? “Your Black Friend and other Strangers” is a series of comic shorts that center around race as depicted through the trippy lens of a 21st-Century punk. One comic takes place in a coffee shop, as a black friend observes the interaction of a an oblivious customer and a barista. Another story follows two black punks who are harassed by a nasty cop until the tables are gruesomely turned.

Yes We (Still) Can: Politics in the Age of Obama, Twitter, and Trump by Dan Pfeiffer

We seem to be reaching a critical mass of White House memoirs. But, as a Pod Save America fan, I couldn’t pass up Dan Pfieffer’s memoir of his time before, during and after as White House Communications Director during the Obama administration. This book clearly panders to his own audience and demographic, it’s not a book that’s going to cross party lines or anything (his vicious yet accurate description of Mitch McConnell is pure gold). And, honestly that’s a shame, because he offers some pretty interesting insight into things like the rise of “fake news,” communication missteps during the Obama administration and how working for the White House should really come with an FDA health warning.

A gorgeous, blonde vampire absconds to the bottom of the ocean to live her life in peace and quiet among the jellyfish. When her home and wildlife are threatened by an oil spill, she emerges from the water to fuck shit up. But, first she needs funds and how does one obtain these funds as quickly as possible? By becoming a Cam Girl, duh. This comic is a lot of things. It’s funny, it’s gory, it’s stupid, it’s absurd and it’s fun to read. It pokes fun at everyone and everything from bleeding-heart environmentalists to greedy, corrupt big business to sanctimonious, bible-thumping (literally) maniacs.

This isn’t a comic series with a wide appeal, but if you’ve dipped your toe into comics before, appreciate variety and irreverent humor, I think this is worth a look-see.

Time for the DNF Train! I gave up on three books this month because…well, because I can:

It Will All Hurt by Farel Dalrymple

I think this is a dystopian story set in the future? But I’m not really sure. This was completely indecipherable. Drawn as a hazy, dreamy sketch, I had a hard time distinguishing the order of the panels, who was saying what and what was actually happening.

How to Be Danish: A Journey to the Cultural Heart of Denmark by Patrick Kingsley

Dry and boring, this book had a just handful of insightful facts about Danish culture, food and their approach to education. But, like, so does a Wikipedia page.

A Quiet Life in the Country by T E Kinsey

I had a hard time finishing the audiobook of “A Quiet Life in the Country” which was charming and cute. The narrator was fantastic and the mystery was adequate. So, why couldn’t I get along? It just felt like a BBC mini-series that was adapted as a book. I felt like I needed visuals and this just didn’t work for me. It was too slow and too quaint, I often found my mind wandering to what I was going to make for dinner instead of caring about the murder mystery.

That’s it for July! Have you read any of these? Do you plan to? Hit me up here or on Instagram.