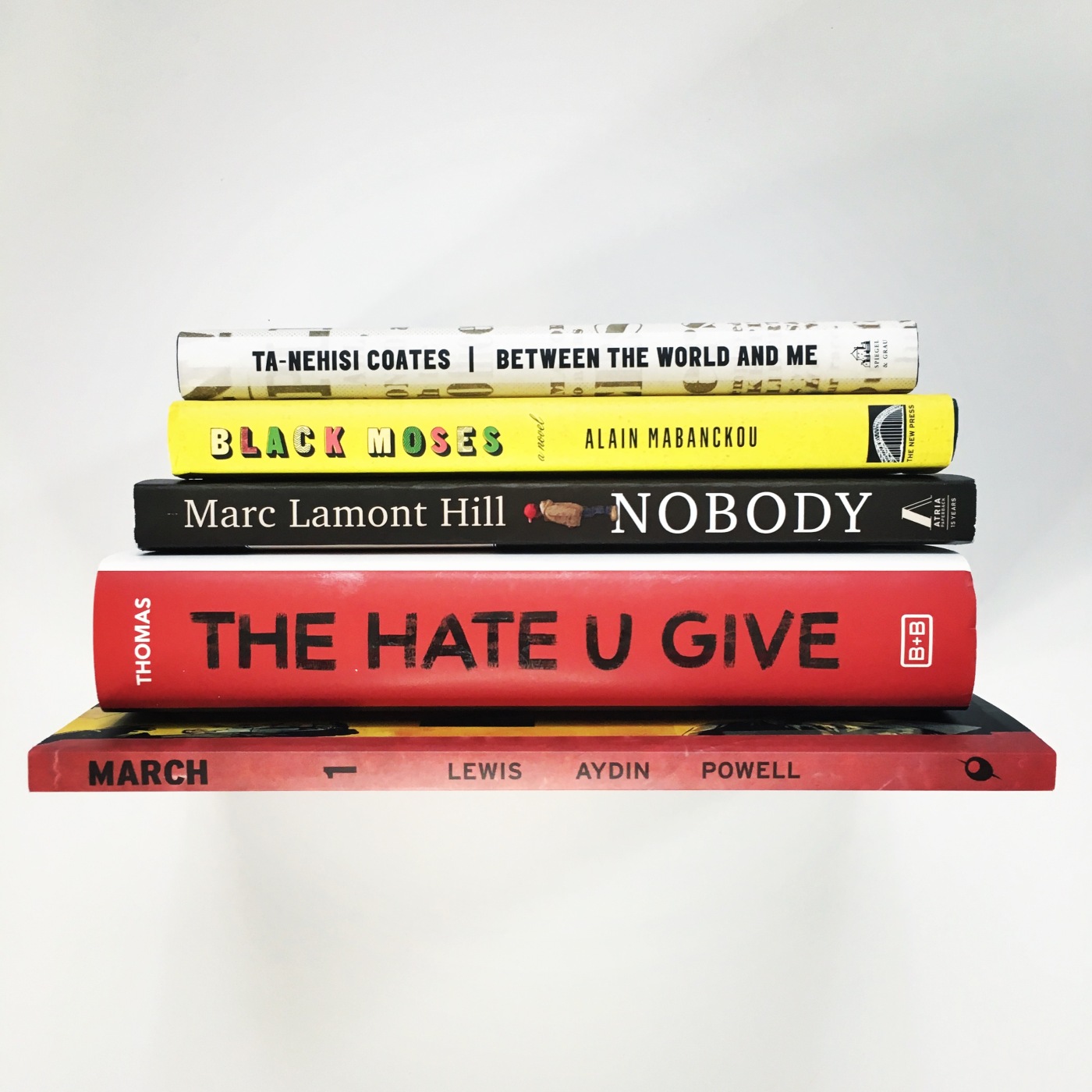 In celebration of Black History Month, I decided to pull books from my personal library by black authors and on black history. I managed to read 4 out of the 5 books on my self-imposed reading list, as well as a few miscellaneous titles that I started in late January.

Beginning with my Black History Month reading list, here are my mini-reviews in ascending order:

The Hate U Give by Angie Thomas
My rating: 3 of 5 stars “The Hate U Give” is a moving novelization of an all-too familiar headline: a young black girl witnesses the police shooting of her unarmed friend. The book has one of the strongest, most loving depictions of family dynamics that I have ever encountered in the YA genre – I found each of the family members to be multi-faceted and deeply endearing. “The Hate U Give” also approaches a difficult topic with a lot of heart. But, it’s not perfect. The book is absurdly lengthy – coming in at 464 pages – and full of brief vignettes attempting to tackle a variety of serious subjects: casual racism, grief, street justice, gang violence, poverty, addiction, and interracial relationships, just to list a few. And, the main thesis (speaking your truth in the face of adversity and systemic racism) feels weak and out of focus for a majority of the book. Still, “The Hate U Give” is timely, necessary and adds much-needed complexity to the YA genre.

Black Moses by Alain Mabanckou
My rating: 4 of 5 stars
This little book took me by surprise – I wasn’t expecting to enjoy it as much as I did. It’s often referred to as the Oliver Twist of the Congo and I can see why. This book follows orphan Moses who leaves the orphanage with a pair of twins to start a life of petty crime in a seaport town. It’s whimsical and sweet but jarring and heartbreaking when you least expect it. Throughout the book, Bonaventure, Moses’ perpetually anxious friend, repeats, “This is serious, Moses! Really serious!” A refrain that is just as much a warning to the reader as it is to the protagonist.

Between the World and Me by Ta-Nehisi Coates
My rating: 4 of 5 stars
In this book, Coates addresses his young son on race and the body – the agency (or lack thereof) of young black men in America. I’m not even gonna lie: a lot of this went over my head. Like, a lot. It’s deeply philosophical and personal but also cynical and melancholy. This book took me all month to read because it required so much reflection and research. Using sticky tabs, I annotated a shit-ton of this book so I can return to passages – especially once I add more required reading (i.e. Baldwin, Ellison, Du Bois) to my library.

March: Book One by John Lewis
My rating: 5 of 5 stars
I received this graphic novel as part of my Noir Reads subscription box. This is a richly illustrated 3-book series about John Lewis’ life and his recollections of the civil rights movement. I loved how the panels build anticipation and a sense of scale. For example, when Lewis first meets Dr. Martin Luther King, Jr. – he’s wordlessly led down a long corridor until he finally turns a doorknob and reaches the office where MLK Jr. looks up from his desk to say, “Are you the boy from Troy? Are you John Lewis?” I was both horrified by the seemingly bottomless pit of human wickedness and awed by the indefatigable spirit of the leaders in the movement.

The one that didn’t make it:

Nobody: Casualties of America’s War on the Vulnerable, from Ferguson to Flint and Beyond by Marc Lamont Hill
Around mid-February, I hit a reading wall brought on by an exhausting negative news cycle. Unfortunately, I couldn’t find the motivation to finish Lamont’s “Nobody” a dry, painfully academic but informative look at classicism, poverty and racism. There’s a lot of value in this book but for now, I re-shelved it.

And now for the rest of the books I finished in February:

The Kitchen by Ollie Masters
My rating: 3 of 5 stars
Think Goodfellas, but with women. This was gritty and violent but I couldn’t find a lot of depth here. There’s not enough relationship-building between the female characters and aside from murdering rivals, I had no idea what their illegal mobster activities actually consisted of. I can’t imagine how they intend on adapting this for the big screen.

Brave by Rose McGowan
My rating: 3 of 5 stars
Rose McGowan is mad as hell and she’s not gonna take it anymore. That’s pretty much the thesis of her memoir “Brave.” The book focuses on the repeated sexual advances and abuses she experienced throughout her life, specifically in Hollywood. And, she’s angry. At men, at the “Machine” designed to perpetuate abuses against women and even you, the reader, for being a complicit consumer of entertainment and media. Ouch! McGowan’s book has significant leaps of time that left me struggling to create meaningful connections, from her childhood growing up in the cult Children of God, to her grief over a deceased boyfriend, to walking down the aisle as Paige Matthews (she blames you for that too). Although McGowan isn’t a very good storyteller, it doesn’t make her life experiences any less important.

Doomed Queens: Royal Women Who Met Bad Ends, From Cleopatra to Princess Di by Kris Waldherr
My rating: 3 of 5 stars
I love a good quick, compilation of historical facts and “Doomed Queens” was a fun (albeit morbid) little book about royal women and their untimely demises. There are lots of unique, original illustrations throughout the pages and the softcover edition even includes paper doll cutouts in the flap – although what kind of monster would take scissors to the cover of a book?

The Last Black Unicorn by Tiffany Haddish
My rating: 4 of 5 stars
When it comes to memoirs, I almost always try to get the audiobook version narrated by the author. It feels more authentic and immersive to hear directly from the author. And, it’s absolutely the only way to read Tiffany Haddish’s book “The Black Unicorn.” Her memoir is laugh-out-loud hilarious, honest and insightful. Haddish has seen some shit and still manages to remain optimistic despite years of illiteracy, child and domestic abuse, disappointments and obstacles in her comedy career. Stop what you’re doing and pick this up.

Rat Queens, Vol. 1: Sass & Sorcery by Kurtis J. Wiebe
My rating: 5 of 5 stars
I loved this volume about an all-female group of sword-wielding, spell conjuring, bar brawling, trouble-making adventurers. It never felt like it was trying too hard to pander to the reader or be inclusive or edgy. It’s just plain fun to read, especially as a former RPG nerd. Unfortunately, one of the creators of Rat Queens was embroiled in a domestic abuse scandal which affected the run of the series. Aaaand, it makes buying these personally problematic. But hey, at least there’s the library right?

And, that’s a wrap for February! Tell me, did you attempt a reading list for February? Have you read any of the books in this post?