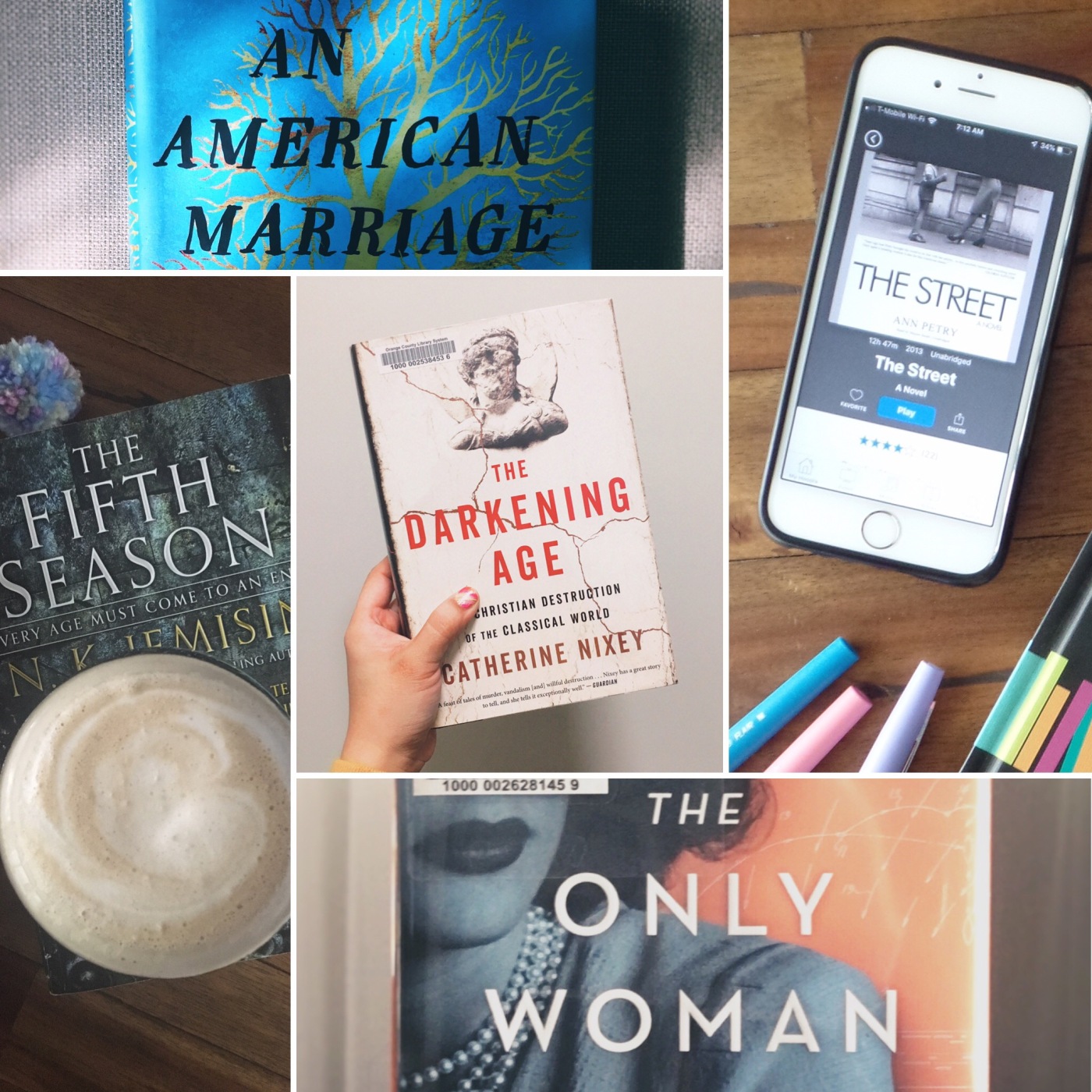 In celebration of Black History Month, I wanted to read books from my TBR list written by black authors. My reading list provided me with lots of quiet reflection, delightful surprises and one really big miss for which I will be endlessly dragged.

Below is my February Reading Wrap-up from highest to lowest rated:

The Fifth Season by N.K. Jemisin

I’m a real Grinch when it comes to science fiction and fantasy. I’m always willing to take a chance on the genre but find myself disappointed by boring medieval magicks or tongue-tying cyber talk that feels super made-up, hokey and lame. Which is why I was really surprised when The Fifth Season, a high-fantasy epic about the end of the world, captured my undivided attention.

In The Fifth Season, tribes of people live on a supercontinent that is constantly being threatened by ongoing earthquakes, volcanoes and other natural calamities. Their survival depends on a much-feared and derided group called Orogenes; people with the ability to control and manipulate the energy of the earth. Jemisin’s book is structured so wholly and completely that it eases the reader into a world that feels grounded in reality rich with culture, history and language.

Her characters are mutli-layered, complex, and sometimes deeply unlikable yet sympathetic. Jemisin also doesn’t hand-feed or over-explain to the reader all the nuanced exchanges between characters, which makes interpreting their interactions SO much fun. And, she writes about sexuality and gender in such a fluid, natural way that I never feel like she’s congratulating herself on being inclusive – it was just another holistic part of the book.

As a reader of some YA fantasy, I do have a mild fatigue of the elemental powers trope. There’s always a set of tribes and they’re always responsible for the tides or terraforming or [insert other elemental thing here]. But controlling the planet’s elements is really only a small part of Jemisin’s book. I ended up loving this book so much I bumped another book on my TBR to pick up the second book in the series.

The Darkening Age: The Christian Destruction of the Classical World by Catherine Nixey

When I returned from a trip to Italy in late 2018, I wanted to learn all the classical things and watch all the documentaries on the Italian Renaissance. This book was one of my leftover library hold binges from January and I really enjoyed such an unusual perspective on the rise of early Christianity in ancient Rome.

Nixey presents research and writings from the point of view of the pagans and the so-called heretics who watched as their temples, sculptures and way of life were slowly eroded away by the new fad called Christianity.

As a causal reader of history, this was fast-paced, interesting and well-written. Nixey has a sardonic sense of humor that some could translate as a deep bias against Christians. And, to be fair, there are a few passages where she refers to these early Christians as uneducated, barbarians (but also, to be fair, this is in the context of when they’re burning thousands of scrolls and mutilating statues of Roman gods.)

Overall, a fascinating book and one I would recommend to other readers who enjoy diverse and provocative perspectives on history.

The Street by Ann Petry

I read this book as part of the #ReadAnnPetry challenge from @ReggieReads on Instagram. Ann Petry’s book “The Street” became the first novel by an African-American woman to sell more than a million copies. And, shame on me for having never read it.

This book did quite a number on my mind and spirit. “The Street” is a long book and relentlessly bleak. I listened to this as an audiobook and really appreciated the narrator’s inflection, voice acting and overall delivery. But at more than 20 hours of listening time, I needed frequent breaks.

“The Street” follows Lutie Johnson, a single black mom in 1940s Harlem as she tries to build a life for herself and her son, Bub. No matter what Lutie does, the cards always seem stacked against her thanks to systemic racism. Ann Petry writes about the street they live on as if it were a living, breathing thing – a monster that chews people up and spits them out. Her story covers a wide range of gross injustices: racism, classism, sexism, assault, poverty. And, it elicited a wide range of emotion from me: rage, sadness, disgust, terror.

For me, the length of this book made it feel like actual work to get through. There were scenes that felt like the endless staircase in the apartment, dark and stifling and hard to see. Maybe this book could have benefited from some editing or maybe I just didn’t have the emotional endurance to deal. Either way, this is a must-read. An eye-opening experience but not an enjoyable one.

The Only Woman in the Room by Marie Benedict

This book was…adequate. Hedy Lamarr’s story is one steeped in romance and intrigue. She was an actress and inventor, probably best known on the internet for her work on a radio guidance system, paving the road toward Bluetooth technology.

Told in first-person perspective, this book follows Hedy as she escapes a dangerous marriage, begins a film career in Hollywood and pitches her invention to the U.S. Navy. Sounds exciting, huh? Unfortunately, this Hedy is written in a bland, okay-ish way that the book never really finds any oomph. This is supposed to be the same young woman who simulated the first-ever non-pornographic female orgasm on screen in the movie “The Ecstasy” but from reading this book, you’d never guess it.

Spiderman: Into the Spider-Verse was a true delight so I had to get my hands on this Spider-Gwen issue to learn more about the girl in ballet shoes.

This was a serviceable, fun introduction to Gwen Stacy, who in this alternative universe, is bitten by a radioactive spider and becomes a superhero. She’s just as plucky as Peter Parker with a little more grit and different hang-ups. In this universe, lots of well-known characters serve entirely new and different purposes: Daredevil is a villain, the Punisher is a cop and Captain America is still a badass but also a woman.

I think new, young fans will be tickled by this version of Spidey, especially given the success of the animated movie.

An American Marriage by Tayari Jones

I’m sure somewhere in the bowels of Instagram headquarters, there’s a room where this book is enshrined on a golden altar with fresh flowers and full-time staffers who are solely responsible for printing and displaying all the praise and comments about this book from #Bookstagram.

At best, it’s a testament to the beauty of subjective opinions. At worst, it’s the most over-rated book I’ve ever read. Ever.

By now you must know, the book is about a modern-day love triangle between a husband, wife and her childhood friend. Very real, very ugly circumstances unfairly pry the newly-weds apart at a time when apparently they can’t afford any speed-bumps in their relationship, let alone a wrongful conviction.

From the start, it’s quite clear that Roy and Celestial’s marriage is doomed. Not like in a star-crossed way but in the they-have-nothing-in-common way. As if reading my mind, Roy tut-tuts the naysayers who judge marriages from the outside looking in. He insists, only he and Celestial can ever really know their marriage. But, like, it’s obvious. Roy has a huge problem with monogamy that he writes off as harmless. And, he has some pretty classic male chauvinist views on women. He bristles at Celestial’s success while he’s incarcerated because he thinks she stole his business idea. Which, as a character flaw, is fine and realistic and believable. But, take for instance, this moment when he’s about to sleep with Davina immediately after being released from prison:

“Sometimes the only thing that can cure a man is the inside of a woman, the right woman who does things the right way.”

If you want me to sympathize with Roy, maybe make him less gross? Or, demonstrate he’s emotionally growing and learning in any capacity? But he never does.

His wife, Celestial stews with deep, painful secrets that she can’t bring to share with Roy until its too late (and don’t even get me started on the doll thing – I’m no psychiatrist but maybe creating life-like baby dolls that look like your husband isn’t the best coping mechanism for abortion. Also. WHAT?) Children! They decide, adding children to this recipe will surely lead to happiness. *CUE SUBMARINE DIVE ALARMS*

Enter Andre, a textbook white knight “nice guy” who practically preys on Celestial while Roy is incarcerated. Quite frankly, this book doesn’t even need an Andre when Roy and Celestial’s circumstances provide plenty of fodder for exploration and contemplation. So, his presence feels unnecessary and gratuitously dramatic. But sure, fine, let’s throw in a lawn fight.

This is where I’m at a loss about the book’s overall thesis or theme. There’s not a single redeeming quality or self-realization about any of these characters and therefore, I have zero interest in the outcome of their love lives. They’re selfish and spiteful, even before Roy was wrongfully convicted. So when the two inevitably uncouple my reaction is an eye-rolling NO SHIT. Mercifully, the book reads rather quickly since the first 40ish pages are written in epistolary fashion and the other chapters are short and perfunctory. And, honestly, I’d read Tayari Jones again – she writes well and her characters were believable enough to hate. But, by the end, I was relieved to see these people go on their merry way and I really didn’t give a damn who with or why. To which, I say with all due respect: what.was.the.point.of.this?

“An American Marriage” claims to be an exploration of a ruined life after the machine of a broken criminal justice system indiscriminately and disproportionately preys on young, black men.  But, holy shit, that’s not what I read. Instead, it focuses on the all out lawn-fight histrionics of three people who seem to have never been in a shitty relationship before. Somehow, beyond all reason, Roy’s wrongful conviction and subsequent five years in prison plays second fiddle to their drama.

And finally, we reach my DNFs for the month:

My Heroes Have Always Been Junkies by Ed Brubaker

The artwork is great with vibrant shades of pink, cerulean and yellow. But, with a deeply unlikeable protagonist and meandering plot, I gave this one up after a few pages.

The Girl Who Married a Skull: and Other African Stories by Kel McDonald

Brief but charming, this collection is probably better suited for a younger audience, interested in learning about different folklore and fairy tales from countries in Africa. I flipped through to admire the art but there was no overarching theme or additional context to make heads or tails of each story. I’d recommend this and might return to it at some point, but this was just one of those books that didn’t hit the spot for me.

That’s a wrap for February! Tell me, how was your reading month? Did you read any of these? Let me know here or on Instagram.